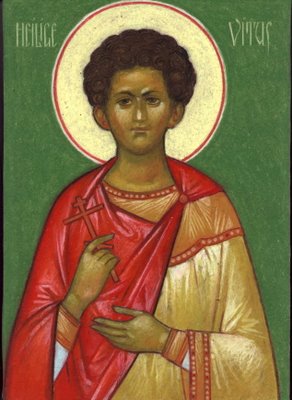 Vitus, according to his extremely unreliable legend, become a Christian when he was very young, around the age of 12, through the influence of the servants who tended him. His tutor and nurse accompanied him on his tours around Sicily where he performed many miracles and converted hundreds if not thousands. When his deeds became widely known his angry father surrendered him to the authorities, who attempted to 'cure' him of his faith. They were unsuccessful, and Vitus with his tutor and nurse fled to Lucania and then to Rome, where he exorcised Emperor Diocletian's son of an evil spirit.

When Vitus would not sacrifice to the Roman gods his cure was attributed to sorcery. He was subjected to various tortures, including submersion in a cauldron of molten lead, from which he emerged unscathed. Vitus was then thrown into the den of a hungry lion, and the beast merely licked him affectionately. One version says that the tormentors gave up and freed Vitus and his companions when during a storm temples were destroyed and an angel guided them back to Lucania, where they eventually died.

The fact remains that his cult is an ancient one. No one is really even certain about when Saint Vitus lived, although most place his martyrdom at the time of Diocletian. There is even some confusion about the site of his martyrdom.

Saint Vitus is one of the Fourteen Holy Helpers, who, are especially venerated in France and Germany. The Holy Helpers are believed to have especially effective intercessory power. The relics of Vitus are said to possess many healing properties, especially when epileptics pray before them

The reason for his patronage of the Dramatic arts and Dance is thought to be related to the practice of16th century Germans who believed they could obtain a year's good health by dancing before the statue of Saint Vitus on his feast day. This dancing developed almost into a mania, with convulsions and twitching, which could resemble chorea, the nervous condition later known as Saint Vitus' dance.